Performance from the Inside Out Part 7:

Bonking, or hitting the wall, can be different experiences to different runners, or the same runner can experience bonking differently on different occasions. Both seasoned runners and those new to the sport have bonked.

The experience is a sudden onset of debilitating fatigue that usually happens during a marathon’s later half and is distinct from the generalized fatigue inherent in marathon running.

Weakness in the knees and legs slows the runner to hardly a walk, pace changes unintentionally, performance deteriorates, mental focus sidetracks, and the initial performance goal may change as the athlete settles on a mere finish. Some runners reported increasing desire to quit and lie down on the pavement, and some even hallucinated.

Studies find that risk factors for increased likelihood to bonk include: being male, expectancy of hitting the wall, previous bonking episodes, and shorter maximum training run (of about 20 miles or 32 kilometers and less).

The most popular physiological explanation for bonking is depletion of available glycogen as an energy source. The switch over to burning fatty acid fuel after glycogen exhaustion may not be effective, or cannot efficiently support the intensity and level of exertion of running a marathon, so performance drops to a walk.

But scientists also showed that glycogen depletion is only a performance limiting factor in runners with lower aerobic capacity and/or lower glycogen storage capacity (especially in leg muscles). It is not a constraint on performance for highly trained elite runners who typically have larger aerobic capacity, leaner upper bodies, and larger thigh muscles.

Carbohydrate loading to replenish glycogen storage before and during marathon—about thirty minutes before glycogen exhaustion—is one of the commonly used strategies to prevent bonking.

However, following ingestion, the carbohydrate must be released from the stomach to the gut for digestion and absorption before it can be used for energy. Our gut and gut microbes play important roles in modulating stomach emptying besides the digestion and absorption of carbohydrates, thus impacting marathon performance in ways beyond facilitating energy harvest and fuel use.

Since physiological, behavioral, cognitive, emotional, and motivational disruptions are experienced in bonking, scientists consider it a psychophysiological phenomenon with the complex interactions between these disruptions underpinning the total experience. They suggest that movement and performance are actually whole-body events, and their energy requirements affect whole-body metabolism.

Endurance running has a profound effect on metabolism, not only in skeletal muscle but also on metabolism in other body tissues and organs including the heart, brain, liver, and adipose (fat) tissues.

By interplaying, interacting, and communicating with other body systems and organs, and by modulating or influencing almost all body functions, our gut and gut microbes impact all adaptations to stressors of marathon running, and ultimately, performance. 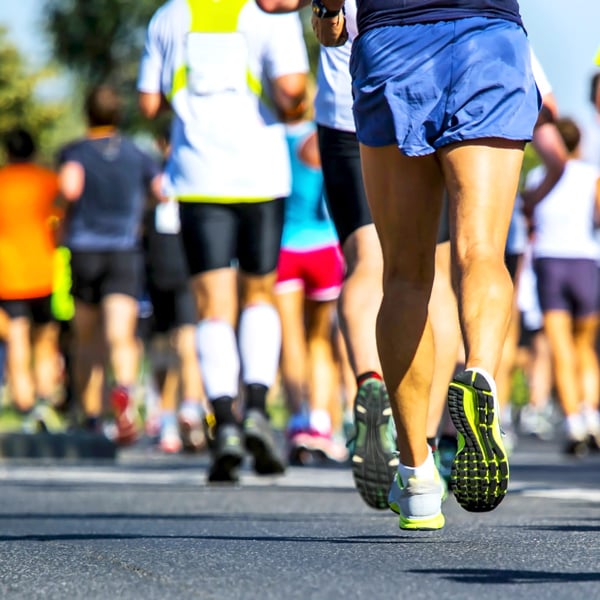 → NEXT: Regulating Inflammation and Preventing Infection