Performance from the Inside Out Part 9:

Performance: Optimal Hydration and the Gut

Why is water important for performance?

Water is essential to human life. It accounts for 50–70% of our body weight. We die from dehydration when body water loss exceeds 10% of body weight.

Water losses arise from respiration, fecal loss, urination, and through skin and sweating, both under normal conditions and during exercise and/or heat exposure. Losses from respiration and fecal loss are typically low.

During exercise, urine formation decreases because blood flow to the kidney is reduced due to increased blood flow demands of the active muscles. Water loss is therefore mostly from sweating.

Even though a drinking strategy in the field is to drink to thirst, approximating that to drinking to sweat loss, the sense of thirst is a subjective sensation, not an objective measurement. There is also a considerable difference in individual sweating rates.

To objectively measure water loss from sweating during exercise, scientists weigh an individual before and after the exercise, and then work out the percentage of body weight loss.

Water regulation occurs through intricate coordination of the central nervous system, hormonal system, and the kidneys in response to changes in 1/ total water volume in the body and 2/ concentrations of solutes (such as minerals) in the blood.

Water contributes to blood volume, which influences cardiac output. It also acts as a buffer for the body from increasing core body temperature as metabolic heat production during strenuous exercise increases. Since cardiac output and regulation of core body temperature greatly impact performance, the ill effects of water imbalance are more pronounced during high-intensity and prolonged physical activity.

Dehydration seems to have its most prominent effect on the cardiovascular system due to reduced blood volume from loss of water due to sweating. Reduction in blood volume can happen quickly. A study showed that a group of firefighters lost 15% blood volume from sweating after only 18 minutes of strenuous drills. In order to pump enough blood to circulate the body, heart rate has to increase to make up for reduced volume of blood pumped during each stroke.

But increasing heart rate cannot indefinitely compensate for decreasing stroke volume, so greatly reduced blood flow to the muscles and skin from dehydration will lead to fatigue, exhaustion, impaired performance, and eventually termination of the activity.

With reduced oxygen delivered to the muscle and liver for energy use, energy fuel supply can also be compromised when blood flow is reduced in dehydration.

How can dehydration impair performance?

Optimal hydration is essential for endurance performance. Evidence from performance tests shows that dehydration has negative effects on performance if the activity lasts longer than 30 seconds.

Even mild levels of dehydration, as low as 1–2% of body weight loss, impairs aerobic and endurance performance. An excess loss of 5% body weight of water in sweating during endurance sports can decrease athletic performance by about 30%.

Studies find that dehydration increases mean VO2and heart rate and decreases gross efficiency, speed, and sports-specific skills. Peak force, strength, rate of force development, time to exhaustion, and finishing time in running races were all compromised by dehydration. It has been shown that 1.5–2% of water loss can increase finishing times during 1,500-, 5,000-, and 10,000-meter runs by 10.2, 23.4, and 94.2 seconds respectively.

Dehydration not only impairs performance; it also increases the rate of perceived exhaustion and risk of heat illness, and impairs muscle performance.

Reduced blood volume from loss of water, combined with greater blood flow demand to the active muscles, may impair sweating. As sweating is the most effective way to lower body core temperature during exercise, dehydration may cause even more core temperature increase in hot and humid sports environments.

Increase in core temperature may affect muscle strength production by reducing motor cortex activation in the brain, peripheral stimulus, and power output. Dehydration of 3–4% of loss in body weight due to water loss results in reduction of about 2% in strength, about 3% in power, and about 10% in high-intensity endurance.

Studies also show that moderate dehydration induced by exercising in the heat can impair isometric knee extension by about 2%. A 6.7% of reduction in isometric elbow extension with 2% of dehydration (i.e., loss of 3 lb. of body weight due to sweating for an adult man weighing 150 lb.) was observed.

The impairment of mood and self-reported sense of well-being seemed to be even greater—approximately twice the ill effects on cognitive function. Increases in anger-hostility, fatigue-inertia, total mood disturbance, perceived difficulty of task, and headache were reported. Concentration and goal-focusing were also impaired.

How are dehydration and overhydration detrimental to performance?

The positive or negative charged atoms (ions) of minerals are called electrolytes because of their ability to conduct electricity when dissolved in water.

When the electric charge of a molecule is changed, the interactions both within the molecule and with other surrounding molecules are also changed. These changes of the electrolytes in our body affect our vital functions such as heart rhythm and brain chemistry.

Our electrolyte balance can be measured by plasma osmolality, the number of dissolved particles in the blood to water. Normal plasma osmolality is 275–300 millismoles/kg of water (mOsm/kg). Sodium, together with potassium, calcium, urea, and glucose constitute about 95% of total concentration of solutes in the blood.

ADH is sensitive to changes in plasma osmolality of as little as 1–2%. High ADH increases reabsorption of water and produces a low volume of highly concentrated urine. This process ensures that plasma osmolarity is tightly controlled.

The capacity of the kidneys to excrete water is maximal one liter per hour. When fluid intake rate exceeds this limit, electrolyte concentration is diluted. It is recommended to never drink so much that there is body weight gain from drinking.

Sodium is an electrolyte and it helps regulate the amount of water in and around our cells. Hyponatremia occurs when the concentration of sodium in the blood is abnormally low. When this happens, water moves into the cells, which begin to swell. This swelling can cause many acute and chronic problems, from mild to life-threatening. Hyponatremia is the most common disorder of electrolyte balance.

Described initially as water intoxication in 1985, exercise-associated hyponatremia is defined as a blood sodium concentration lower than the normal reference level range of 135–145 mEq/L, occurring during or up to 24 hours after prolonged exertive physical activity.

The causes of hyponatremia are sweating, drinking too much water or beer, diarrhea, vomiting, using diuretics, adrenal insufficiency, hypothyroidism, syndrome of inappropriate antidiuretic hormone secretion (SIADH), heart failure, liver failure, and kidney failure. Overhydration together with sweating is the common cause for hyponatremia in endurance sports.

The presence and severity of symptoms are related to the level of sodium in the blood, with lower levels of plasma sodium associated with more severe symptoms. Signs of hyponatremia include muscle weakness, spasms or cramps, nausea, vomiting, headache, short-term memory loss, confusion, lethargy, fatigue, loss of appetite, irritability, seizures, and decreased consciousness or coma. All are detrimental or even disastrous to endurance sports performance.

Emerging research data also suggest that mild hyponatremia is associated with numerous complications or subtle, less-recognized symptoms, such as increased falls, altered posture and gait, reduced attention, and impaired cognition, all of which can impact optimal endurance performance.

It can be serious, even fatal.

When sodium levels in the blood become very low, water can also enter the brain cells and cause them to swell (cerebral edema). This results in increased pressure in the skull, causing a squeezing of the brain across the internal structures of the skull (hyponatremic encephalopathy).

This condition can lead to headache, nausea, vomiting, confusion, seizures, brain stem compression, respiratory arrest, and accumulation of fluid in the lungs that is non-cardiogenic (not related to heart problems).

Hyponatremia caused by inappropriate secretion of ADH (SIADH) has been identified as a probable cause, other than overhydration, underlying rare marathon-related casualties. Inappropriate ADH secretion may be a neuroendocrine stress response to inflammation due to skeletal muscle injury after glycogen depletion (as in hitting the wall) in the marathon setting.

Not only nutrients are absorbed through our gut wall. Water and electrolytes are also absorbed from (and reabsorbed), and secreted into, our gut through the gut walls.

Because optimal hydration state, electrolyte balance, and a well-functioning protective gut barrier are essential for sports performance, it is important to understand the role gut microbes play in water and electrolyte transport and the associated changes to the gut wall mucus layer.

Taken together, study findings suggest that microbiome influences the cellular transport of electrolytes through the gut mucosa and contribute to hydration state, while reducing the plasma osmolality (that leads to the sense of thirst). The significance of the role gut microbiome plays in maintaining gut wall barrier integrity has also been demonstrated.

Scientists conclude that gut microbiome is associated with the maintenance of proper hydration and electrolyte balance during intense endurance exercise. Gut microbiome is also involved with the prevention of excessive inflammatory response that may compromise gut barrier integrity or lead to serious, even fatal, inappropriate secretion of ADH in hyponatremia. 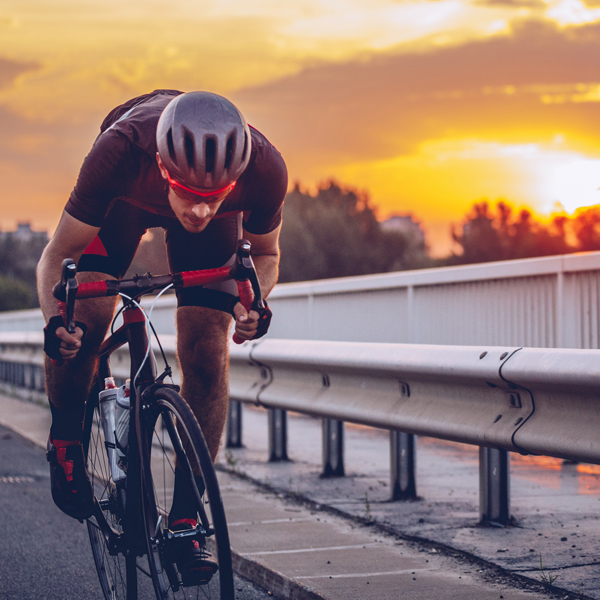 → NEXT: Optimize Redox Balance for Performance