I have struggled with a number of health issues since I was a young girl. To be honest though, until I started doing triathlon and gained a greater awareness of my body and what was normal, I didn’t really realize anything was wrong.

For most of my life I have had Hashimoto’s disease, which is an autoimmune disease that attacks the thyroid gland. I’ve taken thyroid replacement hormone since I was 11 or 12, but again, until I started doing triathlon, I wasn’t really aware of the symptoms of Hashimoto’s. For me, I always noticed that I was easily cold, had poor circulation in my hands and feet, and seemed to have a depressed immune system, but I wasn’t as aware of other symptoms.


What are these symptoms, you might ask? Constipation (maybe TMI, but sometimes I would go up to 2 weeks without going to the bathroom, and on average it was every 3–5 days); bloating and gas; swelling in my legs, face, and feet; irregular periods (I always get them, but never know when they will come); disrupted sleep; terrible night sweats; iron deficiency; and lethargy and general fatigue. I just thought this was normal.


When I made the transition to training and racing as a full-time professional triathlete, my knowledge about Hashimoto’s as well as nutrition, health and wellness, and how the body functions increased. I learned about good carbs versus bad carbs and the role of nutrient timing around training and races for recovery. And I became more acutely aware of how my body felt and reacted to intense training and races.


One of the first things I began to notice was how badly I would swell during travel and after races. While some swelling is totally normal, I would sometimes be looking at upward of 20 pounds of fluid retention after a race. One day I’d be 118 pounds and the next day, I’d be 138. It was very uncomfortable, disheartening, and frustrating. My night sweats would be unbearable as well. Some nights I would have to change 4 times and put several towels down because I soaked through the sheets. I also noticed the swelling and night sweats were worse when I ate gluten.

Even with this heightened awareness, I naively thought that this was all a normal part of post-Ironman recovery. As I became more aware of the various symptoms I was feeling, I tried harder to alleviate them; but nothing I did seemed to make them go away. I tried everything (I thought) to improve my diet, but I still suffered. I ate red meat 5 nights a week and added other iron-rich foods to try to boost my iron levels. I cooked everything in a cast-iron skillet. I removed gluten from my diet. I ate few processed foods and tons of fruits and veggies. I felt like I was trying everything, but nothing was making a difference. My iron levels were still low, my thyroid continued to deteriorate with what felt like an endless flare-up of my Hashimoto’s, and I continued to have most of the symptoms described above.

I was introduced to Ixcela by my former strength trainer. He had done a lot of work with Oracle Team USA for the America’s Cup. Through Ixcela’s testing and analysis of the gut microbiome and subsequent changes to diet, they found they were able to improve overall gut health in their team’s sailors and reduce the number of missed training days by more than 50%. Sailors were getting sick and injured less frequently. This is significant. Particularly as an athlete, the fewer disruptions and the more consistency you have in your training, the better you perform.


As I began to do my own research on gut health, I became fascinated. I was amazed to see that the health of your gut can impact Alzheimer’s and cancer and other diseases. Gut health is tied to how everything in our body functions and is profoundly linked to our longer-term well-being. The more I spoke with Ixcela, the more I came to realize that the symptoms I was still experiencing were likely due to an unhealthy gut, and that by addressing the issues head-on and improving my gut health, I would improve my nutrient absorption, my sleep, my overall health, and my performance.


For me, many of the symptoms I was experiencing were due to irritable bowel syndrome (IBS). This meant that the foods I was eating were irritating my gut, making it difficult for my gut to heal and nutrients to be properly absorbed.

After discussing my test results with my trainer and Ixcela's scientists and nutritionist, we decided that the first course of action was to put me on a “low FODMAP” diet. “FODMAP” is an acronym for “Fermentable Oligo-, Di-, Mono-saccharides And Polyols.” All foods that contain carbohydrates contain varying amounts of these, which are not well absorbed by the small intestine. For some people, foods that are considered “high FODMAP” can be very irritating to the gut, resulting in smelly gas, bloating, inflammation, constipation, disrupted sleep, and more. Foods that are extremely healthy can be high FODMAP, and so although they might be full of great health benefits, they are foods to avoid for some individuals.


As soon as I went on the low FODMAP diet, things immediately began to improve. My stomach bloating and gas went away almost overnight, my sleep improved, and my energy was better. Over time, we began to observe that my swelling after races and travel was significantly better (I was retaining 8 pounds of fluid versus 20). Shockingly, I began to go to the bathroom regularly. My energy levels have dramatically improved, which has also helped my happiness levels as I haven’t felt like I am dragging myself through my days in a fog like I had for so long. And as soon as my symptoms began to improve, my thyroid stabilized. Since going on the low FODMAP diet in February of 2018, I haven’t needed to increase my thyroid medication dosage once—the first time in years it has been stable!


Initially, when I went on the low FODMAP diet, I removed everything that was considered “high FODMAP.” But after a couple of months, I began adding foods back in and experimenting to see if I tolerated some foods better than others. For example, avocado, sweet potato, and blueberries are fine. But other items like garlic, onion, stone fruits (peaches, nectarines, plums—anything with a pit), and certain corn products just don’t work well for me.

Over the past 18 months, it’s been wonderful to see the changes in my gut health too. My Ixcela Assess tests have shown a steady rise, which has correlated well with changes in my symptoms. That is not to say there haven’t been a few setbacks. In May, after Ironman Brazil (where I had the race of my life!!), my husband and I took a few days of vacation and I threw caution to the wind when it came to my diet. I had been feeling so good before the race that I had even been able to add foods back into my diet that I previously hadn’t tolerated well. I thought I was in a place where I could let loose a bit. And boy, did I pay for it! My swelling was almost intolerable, my energy levels dramatically declined, and my recovery from my race was impacted. In fact, I felt like it took me until late August to recover (and I still don’t feel like I am back to where I had been in terms of balance). It was frustrating and I was annoyed with myself for deviating from my plan when things were going so well. And my Ixcela tests reflected this. My scores plummeted to some of the lowest levels I had seen. Thankfully, they have been gradually improving as I have started to recover and get back on track.

As I look back on the last few years, I am so grateful that I was able to partner with Ixcela. Yes, it has been instrumental to my performance as an athlete, but knowing what I know now about how vital gut health is to long-term health, I am so thankful that I was afforded the opportunity to learn about it now and make changes that will impact me far beyond my years as a professional athlete. I’m a believer in sustainability; protecting the environment; eating clean, healthy foods; and being a good steward to the earth. Treating my body with care and being kind to it is consistent with the values I hold in other areas of my life. And for me, investing in my gut health is now a major part of that. 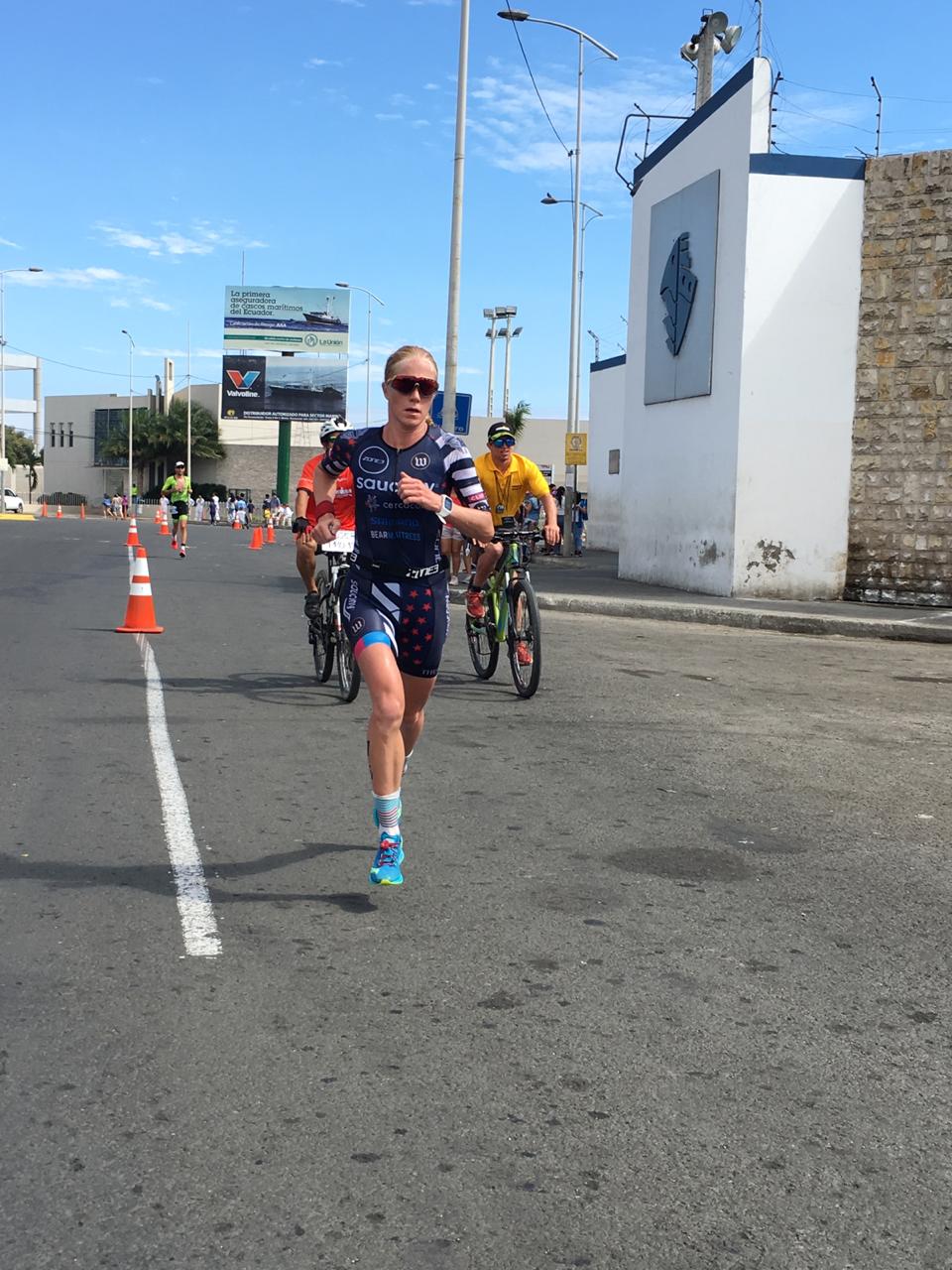 Our dietitians can answer questions about our programs.